BE A FRIEND - The Friends of WOW meet the first Tuesday of the month, 6 PM, at the WOWSPACE.  All are welcome.  Learn about upcoming events and where you might want to put your talents to work.

BE AN ART PARTNER - Art Partners are individuals or businesses who support the mission of WOW with a yearly membership donation.  Click for further details. 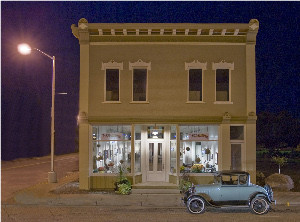 When was the WOWSPACE at 114 Vinal Street built?

We don't know for sure. Court papers from November 6, 1886 suggest that it was built sometime prior to September 4, 1884. In this document, it indicates that Adolph Meyer and his wife, O.M. Meyer were sued by Henry Mendel and Ira Smith causing the property to be sold.

This leads to many questions. Were Mr. and Mrs. Meyer the original owners? What had been their plans for the building with its elegant zinc capitals over the windows, the octopus furnace with the wooden flues, the second story spacious apartment with four identical bedrooms (possibly for roomers?) in additon to the family living space? Or were Mr. Mandel and Mr. Smith the builders or just the mortgage holders?

Answers to these questions may never be learned; however, we do know that on November 6, 1886, on the steps of the courthouse in Shawano, Charles Heins of Kiel, Wisconsin, purchased the building for $300.

Since 2006, the WOWSPACE has been refurbished: the octopus furnace with wooden flues is gone; the rosettes on the zinc capitals are burnished with gold; the stained glass windows have been restored; bathrooms have been added and a new tin ceiling is in place. Once auctioned off at a sheriff's sale, the WOWSPACE has an elegance she never knew.

This "WOW" event space has hosted concerts, art shows, wreath making and craft shows. See the "Community Events" page to learn of future and past events.